Matilda was a young women in her late twenties.
even though she looked tens years younger, her hair was tens years ahead,
racing towards a finishing line that was still decades away.
the natural highlights gave her that distinct look that no other girl had.
she was kind and sweet, small and fragile,
but her heart could take on the entire world.
that heart rendered Jeremy helpless on the ground,
shouting silently "not again,"
but again indeed in love he fell.

her eyes were large, bright and brown,
with a sadness not even she was aware of,
but Jeremy noticed and vowed to take it all away.
he couldn't bear to see another living being suffer,
let alone the one to whom his heart belonged.
she also fell for him and soon said "I love you,"
after making love that night when he met her late after work,
when he brought her dinner that she didn't have time to cook.
he never expected to hear that before uttering the words himself,
as he was mentally preparing to do.
he replied with a smile that reached the nearest star.
and they were happy and vowed never to go to sleep mad at each other.

they took long walks among the palaces,
shared kisses among sweets and listened to stories together as her heart broke
every time the characters suffered an impossible love.
but that wasn't them, luckily, because they loved and cared for each other.

the days went by and they moved in together
as they already spent every second they could afford with one another.

and they got slightly mad each day for some tiny detail,
too insignificant to remember now.
they were proud and didn't like to admit their own flaws and faults.
once in a while, they would go to sleep mad at each other.
they'd wake up in the morning longing for the other's embrace,
but then they remembered they didn't fall asleep in each other's arms
and silence would shadow the whole day,
until they had dinner together
and heard stories
and made love
and said "I love you."

but the annoyance would show up here and there,
each time more and more.
and their light turned to shadow and their smiles grew smaller,
until they weren't smiles at all.
and their long walks were reduced to the necessary from one place to another.

and they would say "good morning," "good night" and "I love you"
without their heart skipping a beat,
each time emptier than the last,
until those very words became painful to even think about.
they grew anxious about meeting each other at home
and started making excuses to avoid the other.
even in the short moments in which they were together,
silence creeped in and wouldn't leave.
they remembered the days before,
when they were each other's life, world and universe,
song and prayer,
whisper and shout.

they vowed to restart again and they were happy.
they took long walks, listened to stories,
made love and said "I love you,"
and then they fell asleep in each other's arms.
It was good and, in that moment, they were happy.

afterwards,
Matilda would question Jeremy every time he was silent why he was silent.
Jeremy was merely thinking thoughts unworthy to be verbalised,
lost in his mind's world,
sheltered from the annoyances in her.
her spot by the nose,
that he used to love so much,
was now dull and ugly.

irritating,
mildly infuriating.
she wasn't interesting
and she wasn't happy.

they stopped saying "good night,"
falling asleep wishing they would wake up from a nightmare,
still holding each other as they used to...

they grew apart and Jeremy grew restless.
her eyes were large, bright and brown,
with a sadness that Jeremy couldn't soak anymore.

he said he didn't love her and she probably cried.
painted by joão pestana around 7:03 PM No comments:

I'm counting seconds as eons on Earth,
regretting everything, forsaking my birth!
I long for nothing, care for no crown,
set me free from the chains that weigh me down
since the cursed day when I made you mine
as I uttered the words "be my valentine..."

"forever," she said and "forever," I replied
and as the days went by, "forever" I complied,
because "forever" didn't feel like forever at the time,
“forever” felt so easy when we were in our prime
and we cursed ourselves forever with “forever”
and they watched us do it, saying nothing whatsoever…
painted by joão pestana around 12:52 AM No comments:

as you sleep inside the crystal shell
that I masterfully crafted for you,
you dream the dreams you never tell
and live a life hidden from view.

as you dream inside the bell jar
that I placed above your chambers,
you wish a wish upon a star
that someone somewhere hears your payers.

as you wish inside the glass container
that I assembled with my own hands
you realize that I grow insaner
as I invade your foreign lands.

as you realize the invisible cage
resting upon your weary head,
you gasp for air in screaming rage
and no one hears a word you said.
painted by joão pestana around 3:12 PM No comments:

what is that sound that loops and cracks,
coming from the bottom of my bed?
maybe it tics or maybe it tacs
or maybe it's all in my head.

what feeling is this that's just so cruel —
the loathed confession I've never read —
the dread of being another fool,
'cause maybe it's all in my head.

what thoughts remain when my mind clears
and the necrophagous ghosts take me for dead?
naught but a plain ol' jar of tears
that pours only inside my head.

what sorcery is this that curses my heart
and turns it into pitch black from red?
may it be an evil seed from the start,
may it grow large inside my head.

what is that dark desire and fiery rage
that freezes me like a spider's thread?
it's my own torturing cage —
oh! the thoughts inside my head...

what are these thoughts inside my head,
what business have they in there?
where else did they spread?
they're killing me... and I'm aware!
painted by joão pestana around 2:02 AM No comments: 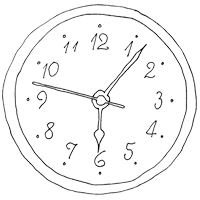